Dealing with Cyberbullying : a meetup in Paris

On Monday April the 11th, the Association National des Cemea was hosting a professional meetup dedicated to cyberbullying at the Maurice Ravel Animation Center in Paris.

This meeting was a continuation of the pan-European seminar that took place a few weeks earlier in Copenhagen as part of the #Cyberbullying project, orchestrated by Erasmus+ and bringing together 6 non-profit european organizations.

Representatives from diverses organisations came during a whole afternoon to present the tools and actions that they developed to adress cyberbullying in France :

The Centre Hubertine Auclert has been actively working against gender-based and sexual violence for several years. It has produced numerous resources on the matter and is very active across different projects and organisations.

The association E-Enfance has been working with schools on Internet-related issues for nearly 20 years. Its vice-director presented “Les Superhéros du Web”, a playful and educational workshop for children that is aimed to deal with issues such as cyberbullying, online identity and screen time.

The Marion la main tendue association was founded after the tragic death of Marion, a young girl that killed herself after she was bullied at school at the age of 13. Her mother and a team of volunteers are raising the voice all over France through workshops and conferences to alert and exchange on bullying at school.

The Ceméa also presented the actions they implemented around cyberbullying, including an educational training course on cybersexism currently conducted by the Ile-de-France association.

During this afternoon, all these organizations had the opportunity to present their different programs and actions, but above all to exchange tools and practices to address these issues with young people and their parent 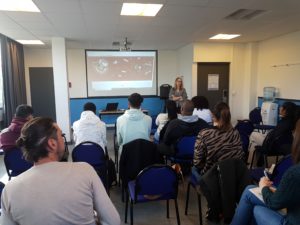 To undestand and raise the voice through cinema

Following these discussions, the Center hosted a screening of two medium-length films on cyberbullying during a movie-debate. These two films, Virtuelle by Leopold Krauss (2019) and Tony with an I, by Marco Alessi (2019), were screened and awarded during the International Education Film Festival, an annual event run by the Association Nationale des Ceméa.

While Virtuelle deals with cyberbullying in a very shocking approach, and tells the tragic story of a shattered young girl after the massive diffusion of a sexual video by her ex-boyfriend, Tony with an I presents a more contrasted situation, and tells how a community of Internet users comes to the aid of a young teenager who was being harassed by her peers at school.

These two stories served as an introduction to the discussion that followed. Willy Pierre, founder of the association “Les Parents”, which also works to raise awareness about bullying in schools was invited to present his organization and to lead the subsequent discussions.

The audience was made up of regulars from the center and Ceméa activists who were able to share their understanding of the phenomenon, their concerns, tell their stories and consider possible courses of action.

Addressing cyberbullying is about understanding and sharing between the actors who are currently involved to build sustainable solutions and to help the people affected by theses violences.

Following the European exchange introduced by Erasmus+, this day was an opportunity for these different organizations and audiences to share their practices, knowledges and experiences and to build together common perspectives to address harassment and cyberbullying among youth.